Alfie was just a month old when a rare childhood tumour caused spinal cord compression and left him paralysed from the waist down.After almost two years, and supported with ankle splints, he began to stand using a frame. Specialist care at Stoke Mandeville Hospital continues to help Alfie in his rehabilitation twice a year, but now his mum has discovered specialist spinal cord injury rehabilitation centre Neurokinex nearer to home, and it is here that Alfie is really finding his feet – in more ways than one.

Alfie started at Neurokinex in August 2017 and he attends the Bristol Centre once a week.

“When Alfie started at Neurokinex he was just getting up on his feet, with support,” says Esther. “To build on this he does lots of standing work, including time with his ankle splints off and work to improve his core strength.”

Being so young, Alfie loves to play and the specialist team at Neurokinex has devised a series of rehabilitation activities that feel more like a game than therapy. Alfie plays games, paints with his feet and walks with the support of one of the trainers, stepping over toys on a treadmill and trying to splat them with his feet.

“Alfie has made significant progress with Neurokinex. His joints are noticeably more flexible and his legs considerably stronger,” says Esther. “He is increasingly confident on his feet and is able to stand for longer periods to play, and even to walk short distances cruising the furniture or using his frame.”

Neurokinex is a not-for-profit organisation which offers one of the most diverse and inclusive spinal cord injury programmes available in the UK. It provides Activity Based Rehabilitation which focuses on the entire body as opposed to just the functioning parts. The programme stimulates the whole body to work as one unit again and, if possible, to re-establish some form of a link or pathway between the paralysed and functioning parts. It also seeks to strengthen the body and improve stamina to help people enjoy multiple health benefits and increase their level of independence.

Part of Alfie’s recovery approach is to build strength in his legs from the hips down, teaching him to swing his legs from the hips and to bear his own weight on each leg independently. In addition, Neurokinex encourages him to use the leg in which he has less sensation, otherwise being so young he does not remember that it is there. They do this by devising different rolling, crawling, kicking and standing games to promote the use of the more affected leg to strengthen it and allow Alfie to use it when walking.

Esther tries to replicate the activities and stretches Alfie does at Neurokinex when they are at home to build on the work being done. “It’s so lovely that he sees Neurokinex time as playtime and the members of the team are all fantastic with him,” says Esther. “I have no doubt their support is helping build on Alfie’s long-term strength and mobility: I’m so glad we found Neurokinex.” 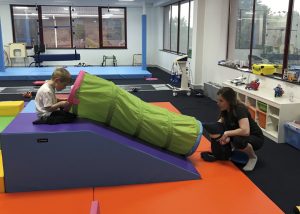